My dad was an inventor. I can see him now sitting in his favorite chair, next to the piano. Stacks of books, newspapers, magazines and yellow pads surround the chair.

He has a yellow pad in his lap, and he's sketching something. Is it an idea for a new product? Or is he drawing an airplane, just for fun. He taught me how to draw a decent plane and a Kilroy Was Here doodle. 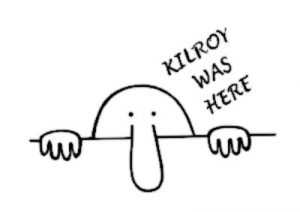 Dad held several patents. He was always thinking, drawing and tinkering in his shop in the basement. We weren't supposed to talk about what he was working on. "It's a family secret," my parents would remind us kids (mostly me). I'd tell you, but then I'd have to kill you, kind of thing.

One day I came home from school with an assignment: Write about what your parents do for a living.

Ruh roh. I asked my dad what to say. "Just tell them I'm a brain surgeon," he instructed. He was an extremely honest person, so I knew he was joking. I think. He had several reasons to hold his cards close. We'll leave it that.

He developed his first big-time invention while working at the NASA Lewis Research Center, Plumbrook Facility in Sandusky, Ohio. There was a problem with its nuclear reactor. As a technical writer, he attended meetings with engineers who were trying to solve the problem. His job was to document the meetings, but my dad was a smart cookie. He went home and ran experiments using (I kid you not) my mom's sewing thimbles, table salt and a bucket of water. And voila! He created the Low Level Water Coolant Indicator, which made it possible to start up the reactor. How cool is that?

It was totally cool, but his solution was met with resistance. I won't disclose the details, but this quote by off-the-beaten-path scientist Dean Radin sums it up: "You're wacky before you succeed. Afterwards, you're a genius."

He patented the device, which was used in other industries and by the military. You wouldn't believe the "toys" we had in our house and yard.

By the time I was in first grade, we had moved back to our hometown in the heart of coal country. He would go on to solve seemingly intractable problems and became internationally known in the explosives industry.

Eventually it became safe to talk about what he was doing. And to my astonishment, he became a master storyteller! He talked with anyone, anywhere, about all manner of topics. My dad passed a few months ago. I miss him, I miss his stories. Thank you, Dad, for your gifts.